← more from
Worlds Within Worlds
Get fresh music recommendations delivered to your inbox every Friday. 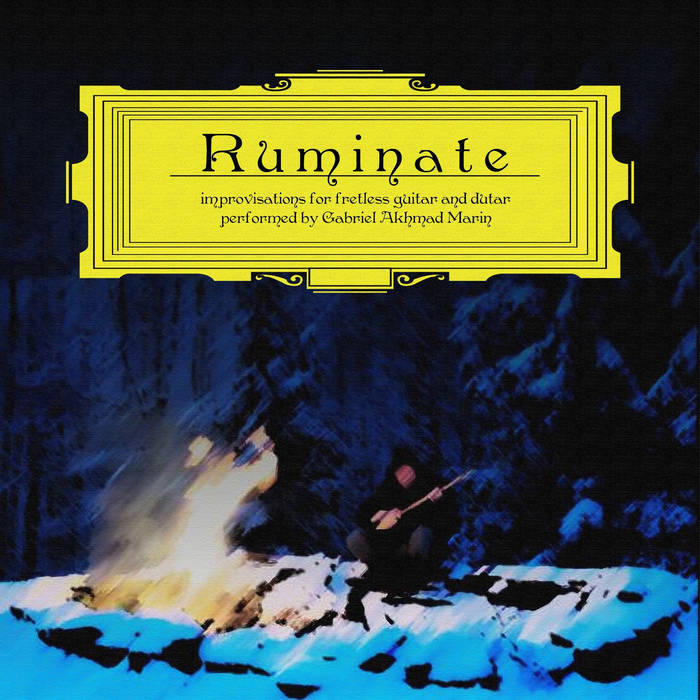 Worlds Within Worlds records is proud to announce the release of Gabriel Akhmad Marin’s Ruminate: Improvisations for Fretless Guitar and Dutar – a masterclass of improvisation drawing from traditions along the Silk Road.

As a co-founder of critically acclaimed jazz fusion act Consider The Source, renown multi-instrumentalist Gabriel Akhmad Marin deftly delivers a new album of instrumental improvisations on ‘Ruminate.’ Listeners will be struck by the seemingly endless layers of melodic nuance while simultaneously lost in musical thought from hypnotic Sufi-inspired rhythms.

Recorded over the course of two evenings June, 2021 at Slamhouse Studio and the artist’s home in Queens, New York, ‘Ruminate’ amalgamates numerous Silk Road musical instruments and genres that are rooted in the traditions of distinct regional performance-practices yet infused with melodic phrasings and strumming techniques spanning across Eurasia.

In lieu of predetermined composition, the record is driven purely by improvisational technique. As a virtuoso of the fretless guitar, Marin manipulates modal effects that digitally mimic natural reeded woodwinds. As an ustod of two-stringed lutes, he proceeds to dazzle his audiences with strumming so sophisticated in its complexity and articulation that it raises the bar for all acoustic lutes: the minimally strung chordophone conversely creates a Babelesque “Wall of Sound” that never falls but merely fades, decaying until silent.

Sunset serves as the first single off ‘Ruminate,’ highlighting the soft, subtle sound of the double reeded, Armenian duduk woodwind is performed with great aplomb on a fretless electric guitar. The main plangent melody infuses a mélange of melodies from the Southern Caucasus Mountains along with subtlest of polyphonic accentuations. To the Azeri Turks and Khorezmis of the Caspian region, the same instrument is instead known as the balaban; both the soft clarinet-esque reedy woodwind. For many, a sunrise symbolizes the start or commencement, but on ‘Ruminate,’ our musical journey instead begins at dusk, for it is only after ‘Sunset’ when our dreams take hold and guide us back to the light of our imagination.

“I feel ‘Sunset’ does a good job of being emotionally expressive yet existing in a rhythmically free space,” continues Marin. “It shows the blend of East and West so naturally that it doesn’t seem to be able to tell which is which. It is all played live on a fretless guitar, which is not at all what people would think hearing it. People will think it is the duduk, but it isn’t.”

Ruminate is musical journey that crisscross the breath of Eurasia, polyphonic airs hang like lofty Caucus peaks, abruptly shifting to shamanist strains from the Kazakh steppe; Persian inspired structures, peppered with Kurdish ornamentation, are equally juxtaposed with North Indian shaped refrains that naturally contour American Country and Western timbres. With additional musical “Easter Eggs” spanning from the Balkan peninsula of Central Europe to Badakhshan mountains of Central Asia, ‘Ruminate’ presents the listener with a gamut of bold Silk Road soliloquies; impromptu vehicles through which to ponder the greater meaning of Old World musical fusion in our digital, post-modern society.

“I've been playing fretless guitar since the early 2000s as a means to increase my expression on the guitar,” begins Marin. “On one hand, I wanted to be as expressive as a singer or a wind player. On the other, I wanted to figure out how to play Eastern European music that was in my blood, with the expressions of Indian, Turkish, Persian music coming from there. I studied the dutar later in life, but it felt right immediately. Normally I am drawn to long sustaining, soaring sounds – the opposite of the dutar. At a time of spiritual awakening in my life, I had a dream where I looked down and saw a dutar in my hands. Within weeks of tracking one down, it felt like I’d been playing my whole life.”

Acclaimed by Premier Guitar Magazine to "[boast] insane chops, impeccable time, mastery of diverse traditional scales, rare fretless guitar fluency and a gift for manipulating effects," Marin once again proves with ‘Ruminate’ that he is a musician beyond compare. Passion, expressionism, meditation and urgency – each feeling ripples outward with every note ‘Ruminate’ emits.

Gabriel Marin has studied and performed music from a huge range of global sources. As one of the few players to explore the fretless guitar and MIDI guitar, he has found a truly unique and expressive voice. In addition his exploration and layering of a vast array of effects contributes to his distinct sound. He is a founding member of internationally renowned fusion band Consider the Source. ... more

Bandcamp Daily  your guide to the world of Bandcamp